It’s hard not to compare the relatively modest gardens created for Hampton Court with the blockbuster, famous name efforts at Chelsea. However, there’s no doubt that Hampton Court welcomes more adventurous ideas within categories such as Conceptual Gardens and Low Cost, High Impact Gardens. This year there was a real thread of resiliance and reconciliation running through many of the designs.  These gardens were perhaps a reflection on the hard economic times and a public show of determination not to give in to some of less pleasant influences on modern society.  The Celebration and Jubilation garden (above) simply celebrated the Diamond Jubilee, a theme which was thankfully not overexploited at the show. 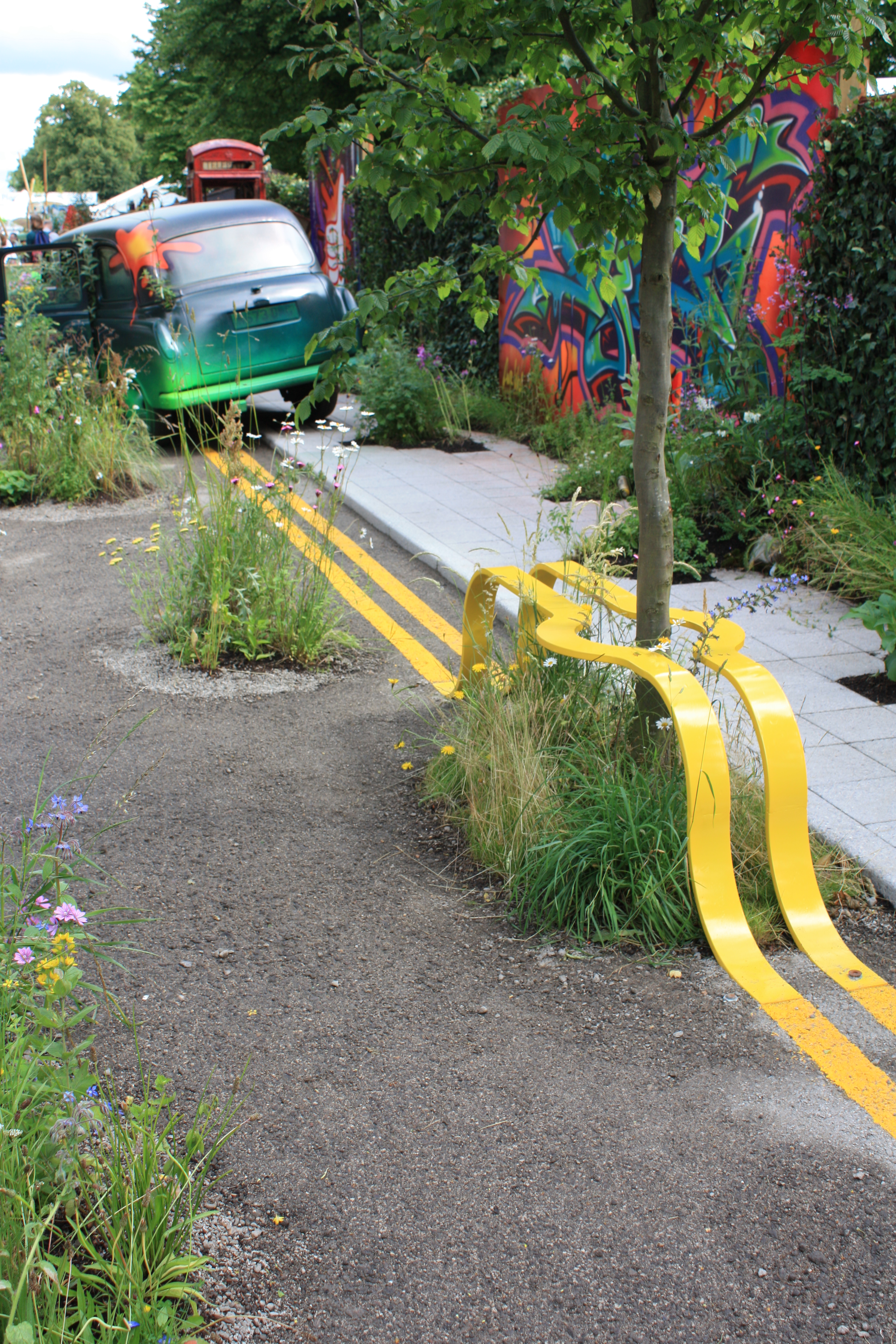 I especially enjoyed some of the more unusual creations this year. A Riot of Colour, designed by Will Sandy, really stood out from the crowd.  A London taxi, vandalised telephone box and graffitied wall are all shown being reclaimed by nature… 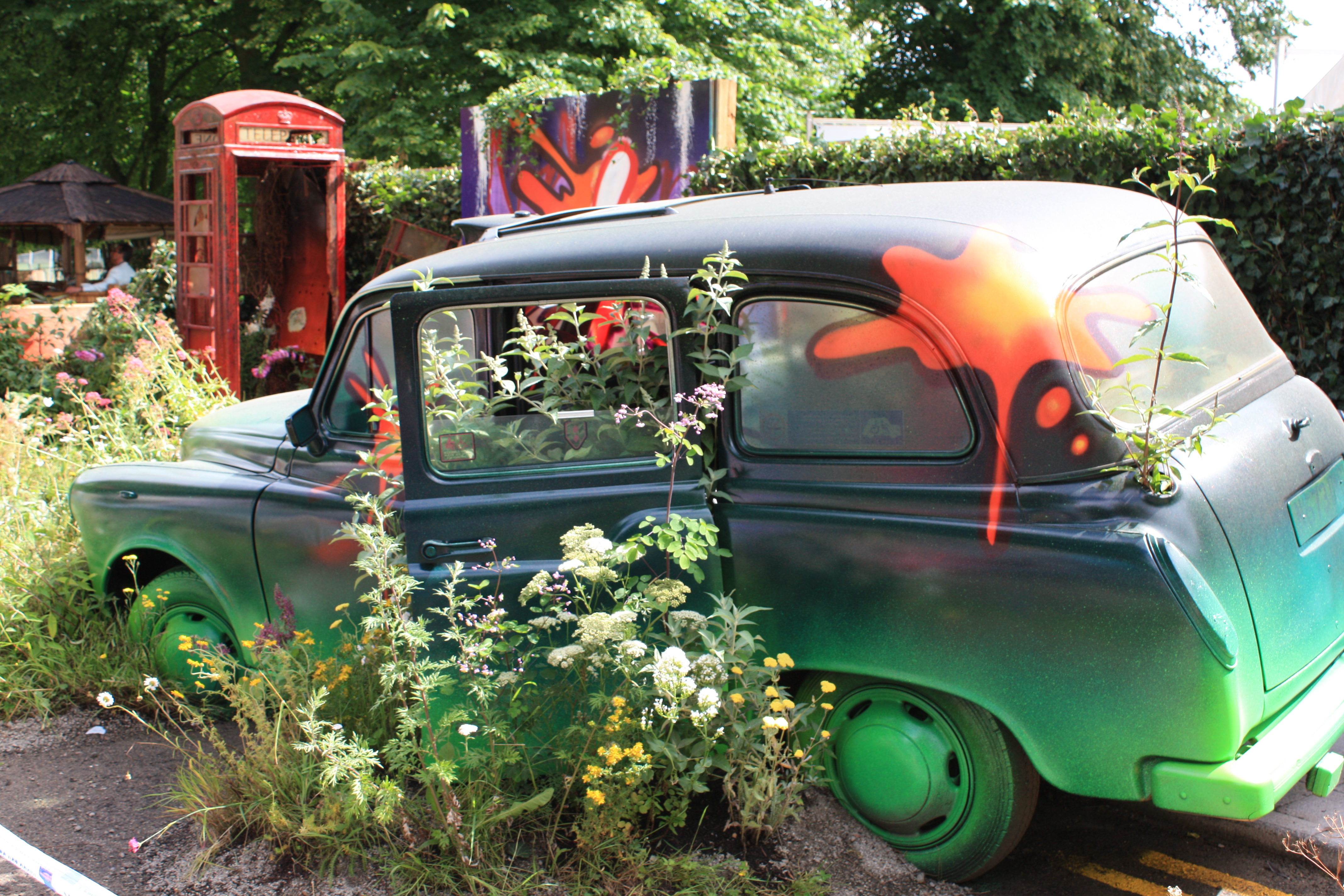 So, it finally stopped raining and I was able to spend a few enjoyable hours in the grounds of Hampton Court Palace, soaking up the sights, the smells and the mud underfoot.  Hampton Court flower show is our second biggest show after Chelsea, but Chelsea it is not.  Although it’s a more spacious event, the gardens are generally on a smaller budget, with fewer big name designers.  The show is also much more commercial – which I think is a blessing and a curse.  It’s certainly great to have the opportunity to buy a few choice specimens.  The range of rare and unusual plants on sale is almost overwhelming,  but the growers and nurserymen are always so helpful, knowledgeable and happy to see their well tended plants go to new homes.  At the same time it’s irritating (and sometimes painful) being cut up constantly by dithering old dears with wheelie…

I promise I will start talking about Southern California soon but this week I have been planning my family trip to England.  No small feat since I have almost twenty gardens on the itinerary.  So I’ve been thinking quite a bit about the three months I spent living in England in 2004 and started looking through my photos of that time.  I am not really sure what the etiquette is for posting old garden photos on a blog but I figure it can’t hurt.  I also started setting up a Flickr account for my photos and wanted to get a little experience with adding pictures to blog posts since I had some troubles the other day.

The first set is mostly to showcase how perfect Wisteria always looks in England.  It has a long bloom period because the weather is cool and they are in full bloom as the fresh new leaves…

While I was in England I spent most of my time at Kew where I was working in the Duke’s Garden as an intern.  I wouldn’t exactly call Kew the most beautiful of gardens as far as design is concerned.  It is mostly a botanical collection of plants and any nicely designed parts depend on the staff working in that section or just luck that a grouping of fine specimens happen to be blooming near each other.  It is rather a hodge podge.

So it was nice to take some field trips and visit some other gardens.  The first was Wakehurst Place which is Kew’s country estate and a National Trust Garden.  It is also home to the Millenium Seed Bank.  As far as design goes it is the complete opposite of Kew.  The landscaped lawns and collection of trees are breathtaking.  The walled Sir Henry Price Garden is done…

One Saturday I rented a car and drove south with some student friends to visit two of Englands most celebrated gardens.  Our first stop was Sissinghurst Castle Garden in Kent.  Sissinghurst was the home of writer Vita Sackville-West. I had written a paper on Vita for my history of landscape design class so I was really looking forward to seeing this garden.  She sounded like quite a character always running around having affairs with both men and women.

Another interesting character was Christopher Lloyd whose garden is Great Dixter.  When I first started gardening his books were some of my favorites because he was so opinionated.  If a plant sucked he wasn’t afraid to say so and he loved bold color combinations that more genteel designers stayed away from.  He passed away in 2006 so I feel very fortunate that I got to meet him while I was shopping in…

This is the finale for this series.  A few more shots of gardens I visited followed by a few flower shots from 2004. I promise the next time I post about England it will be at the end of May when I am there again and the photos will all be current.

Established in 1913, on the grounds of the Chelsea Royal Hospital in London, the RHS Chelsea Flower Show is Britain’s most prestigious flower show.  The show organized by The Royal Horticulture Society has become one of the most celebrated annual events in the world and the showcase for horticultural excellence. The show covers 11 acres of ground and features over 500 exhibitors including show gardens, nurseries, floristry, educational displays and trade stands. The event also provides a showcase for gardening trends, and show gardens over the years have ranged from Japanese and topiary gardens to rock gardens, cottage gardens, and contemporary sculptural gardens. The Queen and the Duke of Edinburgh are traditionally among the first to see the exhibits when they take a private tour every year on opening day.

Mother's Day is a celebration honouring mothers and celebrating motherhood, maternal bonds and the influence of mothers in society.

Earth Day is an annual day on which events are held worldwide to increase awareness and appreciation of the Earth‘s natural environment. Earth Day is now coordinated globally by the Earth Day Network,[1] and is celebrated in more than 175 countries every year.[2] In 2009, the United Nations designated April 22 International Mother Earth Day.[3] Earth Day is planned for April 22 in all years at least through 2015.[4]

This planet is not terra firma.
It is a delicate flower and it must be cared for.
It’s lonely.
It’s small.
It’s isolated, and there is no resupply.
And we are mistreating it.

Speak to the earth, and it shall teach thee.

Touch the earth, love the earth, honour the earth, her plains, her valleys, her hills, and her seas; rest your spirit in her solitary places.

I conjure you, my brethren, to remain faithful to earth, and do not believe those who speak unto you of superterrestrial hopes! Poisoners they are, whether they know it or not.

Remain true to the earth.

I thought how utterly we have forsaken the Earth, in the sense of excluding it from our thoughts. There are but few who consider its physical hugeness, its rough enormity. It is still a disparate monstrosity, full of solitudes, barrens, wilds. It still dwarfs, terrifies, crushes. The rivers still roar, the mountains still crash, the winds still shatter. Man is an affair of cities. His gardens, orchards and fields are mere scrapings. Somehow, however, he has managed to shut out the face of the giant from his windows. But the giant is there, nevertheless.

The earth is not a mere fragment of dead history, stratum upon stratum like the leaves of a book, to be studied by geologists and antiquaries chiefly, but living poetry like the leaves of a tree, which precede flowers and fruit — not a fossil earth, but a living earth; compared with whose great central life all animal and vegetable life is merely parasitic.

Talk of mysteries! Think of our life in Nature — daily to be shown matter, to come in contact with it — rocks, trees, wind on our cheeks. The solid earth!

Go where he will, the wise man is at home,
His hearth the earth, his hall the azure dome.

The earth is the very quintessence of the human condition.

It was not until we saw the picture of the earth, from the moon, that we realized how small and how helpless this planet is — something that we must hold in our arms and care for.

As we begin to comprehend that the earth itself is a kind of manned spaceship hurtling through the infinity of space — it will seem increasingly absurd that we have not better organized the life of the human family.

Smile O voluptuous coolbreathed earth!
Earth of the slumbering and liquid trees!
Earth of departed sunset!
Earth of the mountains misty-top!
Earth of the vitreous pour of the full moon just tinged with blue!
Earth of shine and dark mottling the tide of the river!
Earth of the limpid gray of clouds brighter and clearer for my sake!
Far-swooping elbowed earth!
Rich apple-blossomed earth!
Smile, for your lover comes!

God owns heaven, but He craves the earth.

Gardening is not a rational act. What matters is the immersion of the hands in the earth, that ancient ceremony of which the Pope kissing the tarmac is merely a pallid vestigial remnant.

I am interested in the way that we look at a given landscape and take possession of it in our blood and brain. None of us lives apart from the land entirely; such an isolation is unimaginable. If we are to realize and maintain our humanity, we must come to a moral comprehension of earth and air as it is perceived in the long turn of seasons and of years.

To see the earth as we now see it, small and beautiful in that eternal silence where it floats, is to see ourselves as riders on the earth together, brothers on that bright loveliness in the unending night — brothers who see now they are truly brothers.

The word humility (also human) is derived from the Latin humus, meaning “the soil”. Perhaps this is not simply because it entails stooping and returning to earthly origins, but also because, as we are rooted in this earth of everyday life, we find in it all the vitality and fertility unnoticed by people who merely tramp on across the surface, drawn by distant landscapes.

God does not die on that day when we cease to believe in a personal deity, but we die when our lives cease to be illuminated by the steady radiance, renewed daily, of a wonder, the source of which is beyond all reasoning. … When the sense of the earth unites with the sense of one’s body, one becomes earth of the earth, a plant among plants, an animal born from the soil and fertilizing it. In this union, the body is confirmed in its pantheism.

I pledge devotion to the earth, our one and only home, and to the life this earth sustains; one nation, one spirit indivisible, with freedom and fulfillment for all.